An exciting new addition to my doll family arrived! 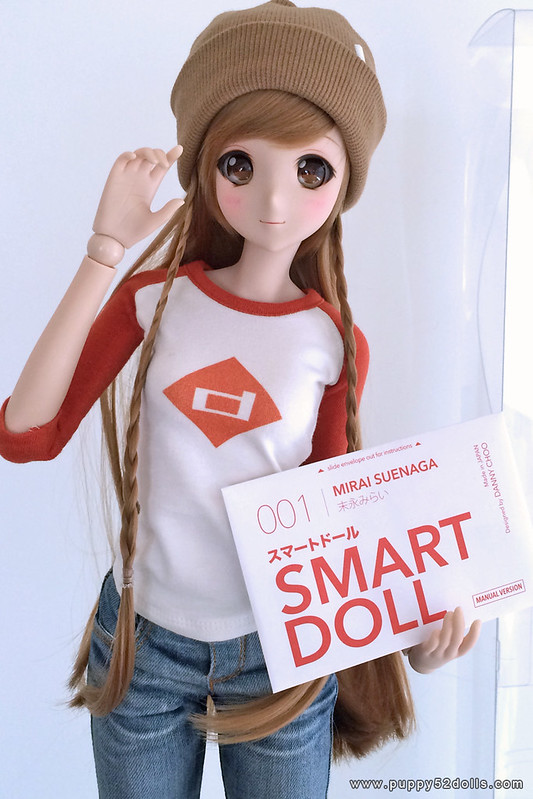 It was really difficult not to talk about her when she was shipped, I did not want to jinx it and cause a delay! She is the Smart Doll 001 : Mirai Suenaga Manual Version or SDMV for short.

Read more about / where to order at smartdoll.jp, I recommend you read through everything to know what you’re getting yourself into haha!

Mirai was shipped by EMS, lovingly packed by Danny and his crew in their office ^o^ It took about 5 working days to reach Canada. (Not counting weekends where I live) 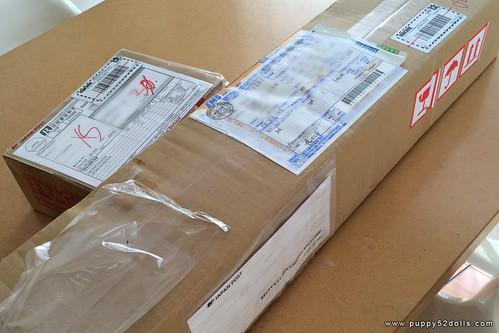 Canadapost poked a hole and made a dent at the bottom of the shipper box ^^; 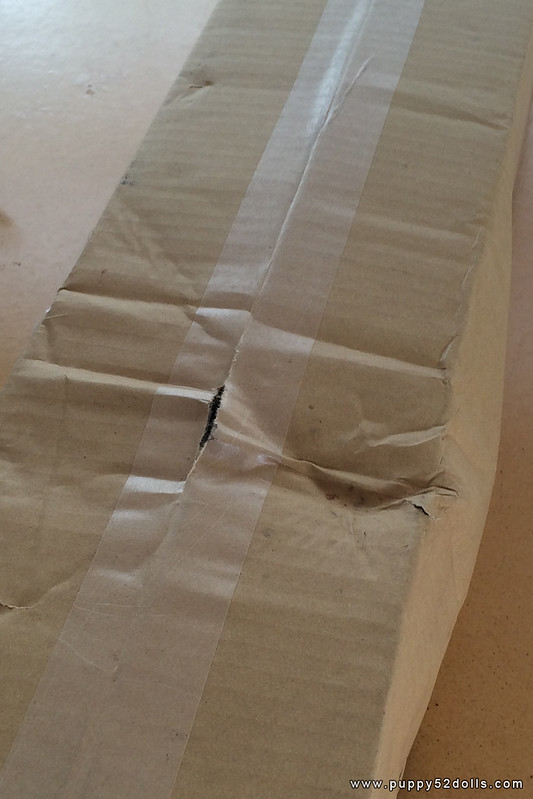 Thankfully Bubble and foam wrap is protecting the clear box inside! 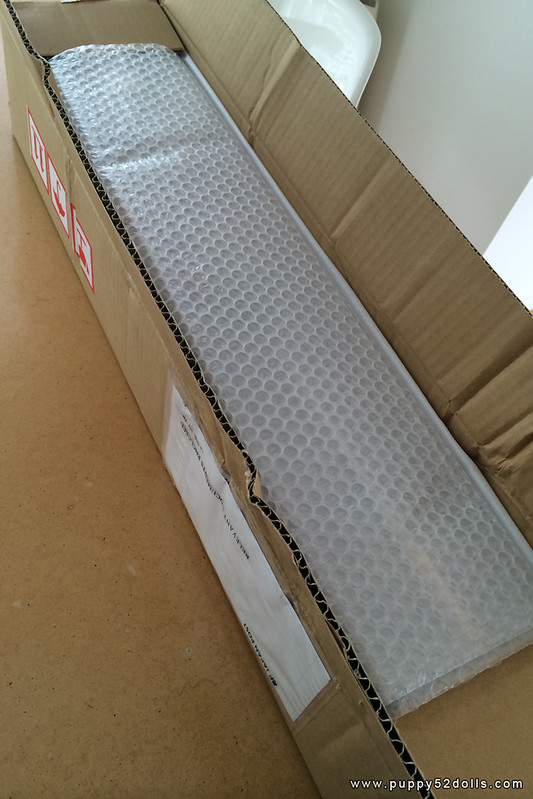 I need to take better photos on my camera when the natural lighting cooperates, but cannot wait to share my quick impressions on her — Mirai SDMV is my most anticipated GET when I found out that she was being released, I badgered Danny quite a bit to make sure I can place my order sooner than later! :P I was lucky enough to get a glimpse of her prototypes when we visited Japan, and honored to been able to create some of the initial prototypes clothing based off Mirai Suenaga, Danny Choo’s mascot. The Mirai Dollfie dream clothing I had made over the years, mostly got to be displayed or traveled with Danny when he goes to overseas conventions overseas etc, I really put a lot of thought and effort into. Being able to place an order and have an actual Mirai doll in my paws is a dream come true! Myself and murasaki.me has been listed on smartdoll.jp as the official tailors, we are looking forward to bring you clothing made specifically for Smart doll in near future! :)

It took a lot not to just crack open the box and take her out, but… I had to take a picture of this neat box encasing Mirai. Due to handling by the shipping service/customs during transit from Japan to Canada, the envelope in front had shifted, but fell into the front when I stood the box up. Mirai’s head and hands had moved a bit as well. There was a white ribbon and a rubber band at the bottom of the box which when I checked with Danny I was told that the white ribbon was supposed to secure Mirai’s leg/feet, and the rubberband was supposed to hold the hair into place. I guess perhaps Mirai chan wanted to escape from the box asap also contributed to the displacement! Update: Currently Danny and ninjas are working on making the experience even better after receiving feedback from initial shipments, Thanks Danny! :) 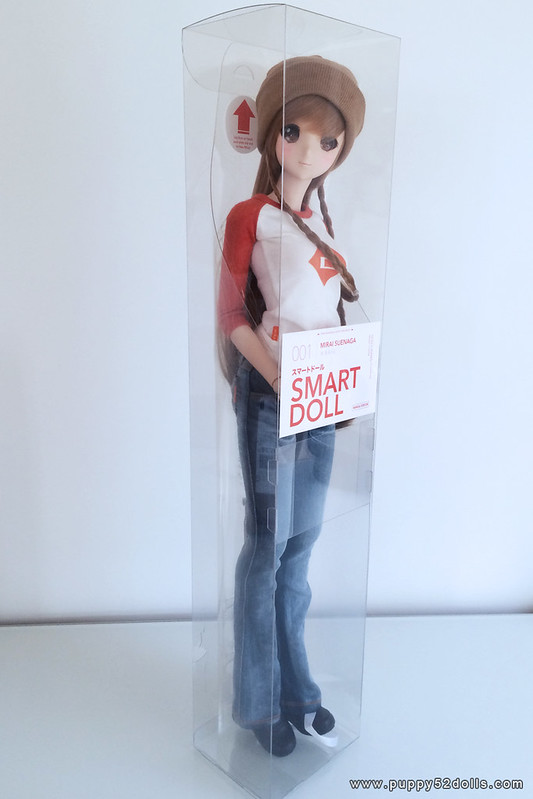 Mirai’s left hand had moved out of the pocket and her thumb was rubbing on the denim, which caused a temporary stain. But that “stain” disappeared over the afternoon, I did not even need to deliberately clean it. The bleached jeans is really nice quality and should not stain (Soft vinyl have a tendency to stain and it’s often a hit and miss, so it is recommended you do not put Mirai in dark clothing if possible) Danny recommends using paint thinner to remove stains or dirt. For me I would use gentle soap and clean off with a damp paper towel too. 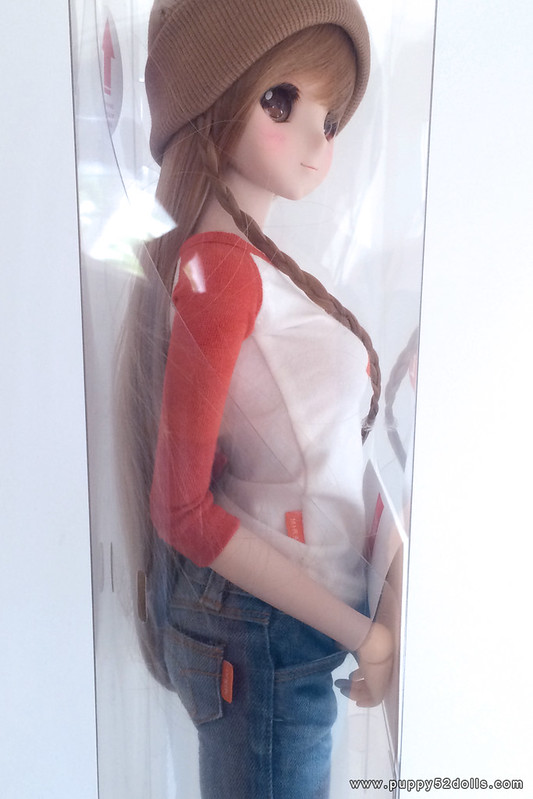 Another feature of Mirai doll I’m very excited about, the retractable stand! ^o^ I like taking my dolls out for outdoor shoots, and it is usually difficult to let the doll stand on her own without a big risk of them falling over. This stand will allow Mirai to stand like a tripod and is thin enough to hide behind her leg and also not hard to photoshop away even if it’s showing. ^^ There’s also plenty other design aspects of the SDMV body which allows a more stable posing on uneven surface :) 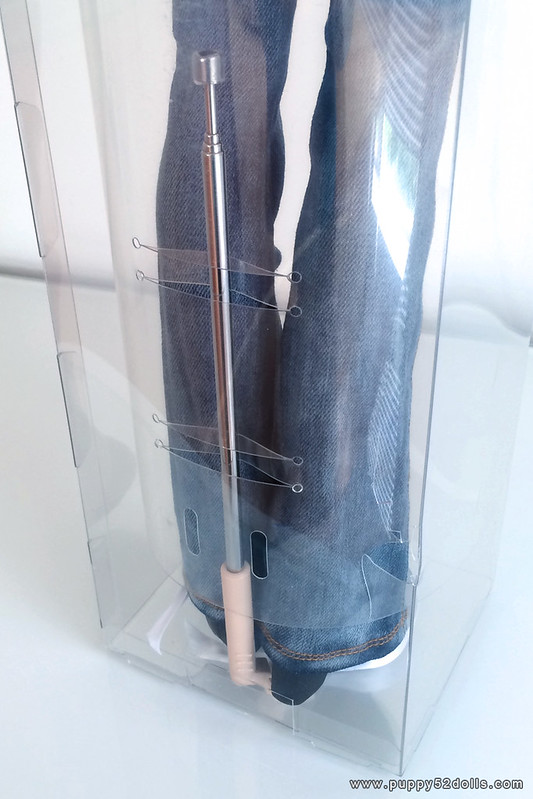 Bonus: in the smaller box next to Mirai’s shipper box contained Moekana which I preordered from amiami ^o^ 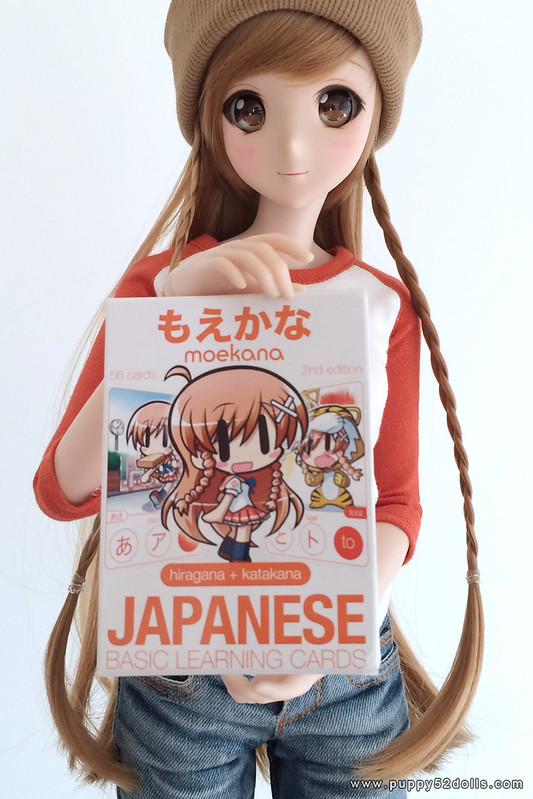 The clothes which Mirai came in are nice quality and there’s much thought into the beanie – which kept Mirai’s wig in place, and the magnetic hair clip :3 Was warned on the website that the clip may fly off – which it has done twice already, so should be kept in a safe place or like being stored by the beanie when Mirai is not in action ^^ 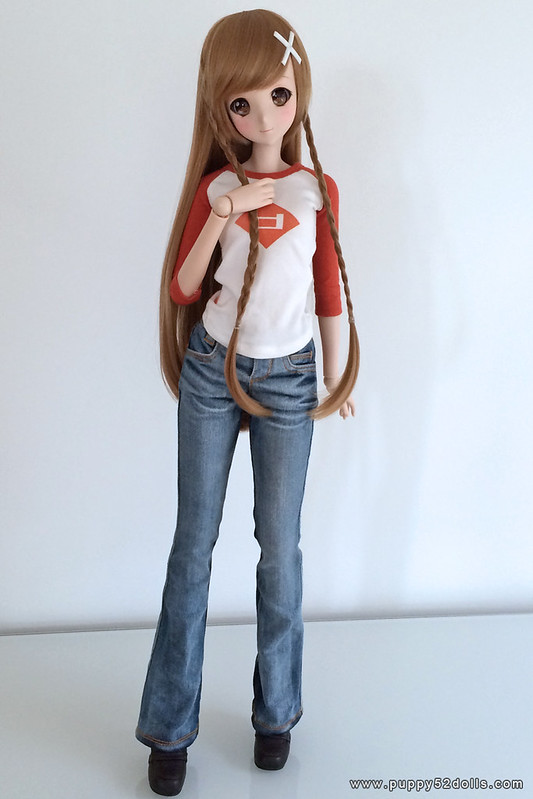 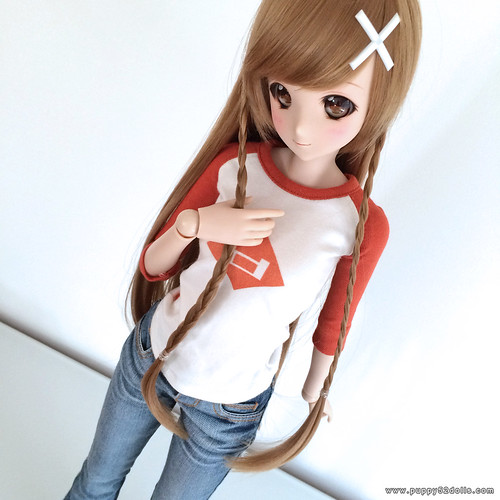 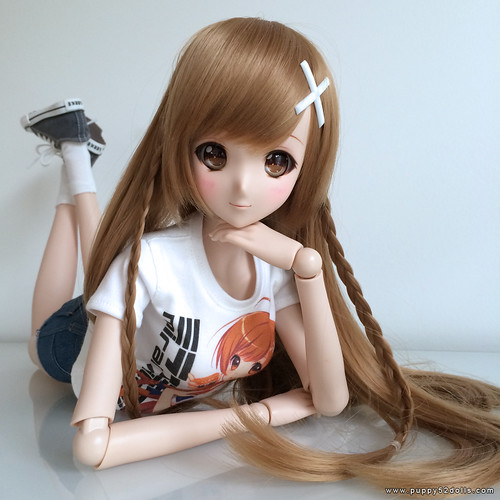 The feeling I get when I pose her is like that of an action figure ^^ but please do be careful not to be too rough on her ^^;/ 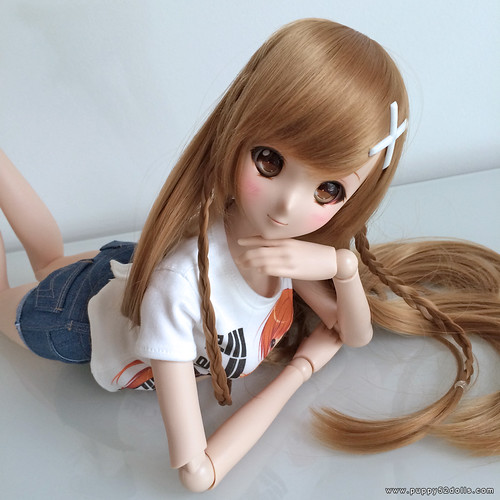 Even Yoshi, our cat was curious about this cute new comer :P But I had to keep him away ^^; Yoshi appears closer than he looks in this picture lol 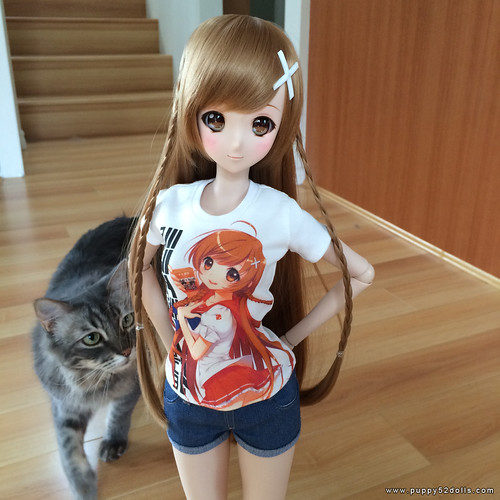 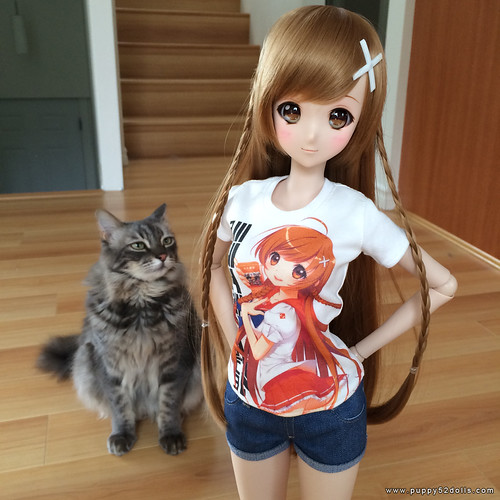 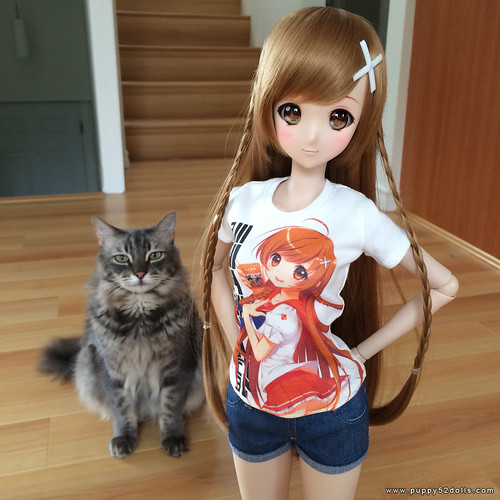 So I’m sure some doll collectors are also curious to know if a Dollfie Dream (by Volks Japan) head can fit onto the smart doll (SDMV) body? The skin tone is only ever so slightly different – Volks normal skin has a slight hint of yellow, while Mirai SDMV body is slightly pink-ish.

On smartdoll.jp, there’s a “hack” on the neck joint being mentioned, by using a 4mm wide clear rubber tube from your local DIY shop.

On Dollfie Dream DDH06 head, my current custom head’s hole is quite small, but the vinyl is softer in newer Dollfie Dream heads from recent years, so I was able to stick it on without issue. The Dollfie Dream head is not very secure as the Volks neck joint is a bit bigger and longer, compared to the shorter and smaller SDMV neck joint. 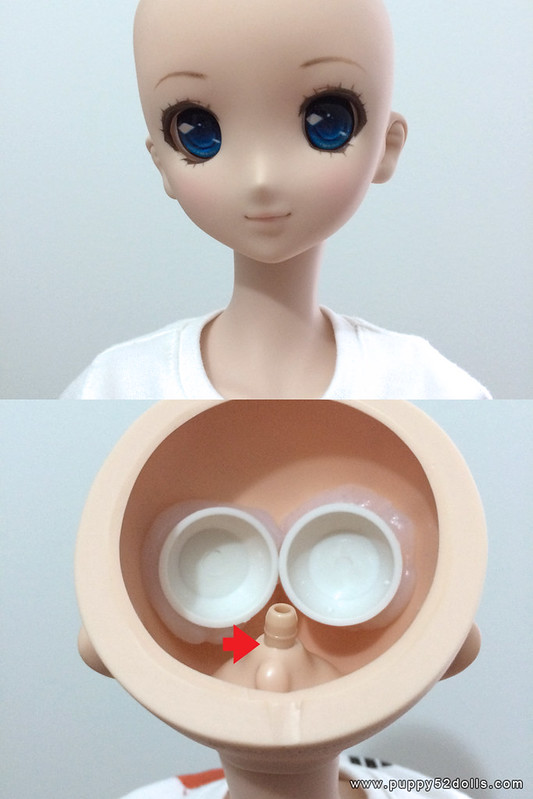 Here’s my Dollfie Dream Yuki Morikawa head (Aki chan), the hole of her neck is a bit bigger than most of my other Dollfie Dreams, so even on a Volks body it’s quite loose. So she will benefit from the clear tube hack. 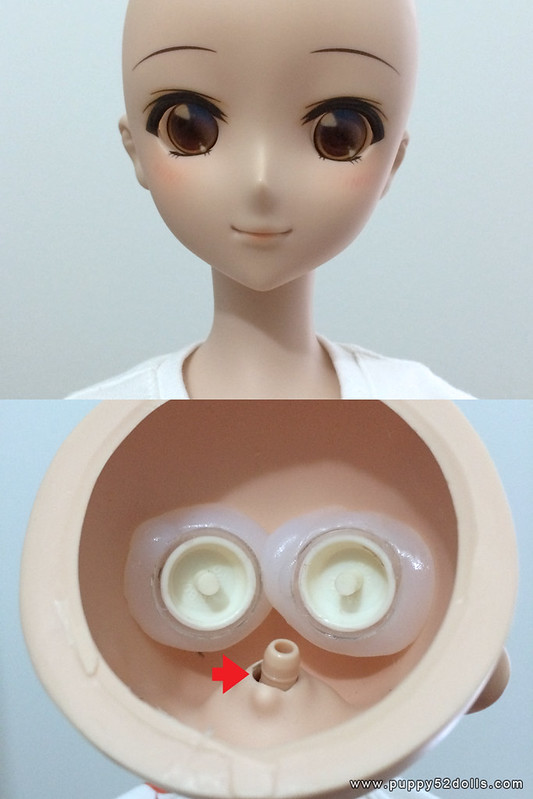 Unfortunately on Dollfie Dream DDH01 head, the neck looks really long, here’s the example on my custom Taiga head. So unfortunately, this head looks weird on the SDMV body ^o^; (I personally think this head looks best on Mini Dollfie Dream body) Also the hole is quite shallow, meaning head will fall off very easily even if you don’t mind the neck… 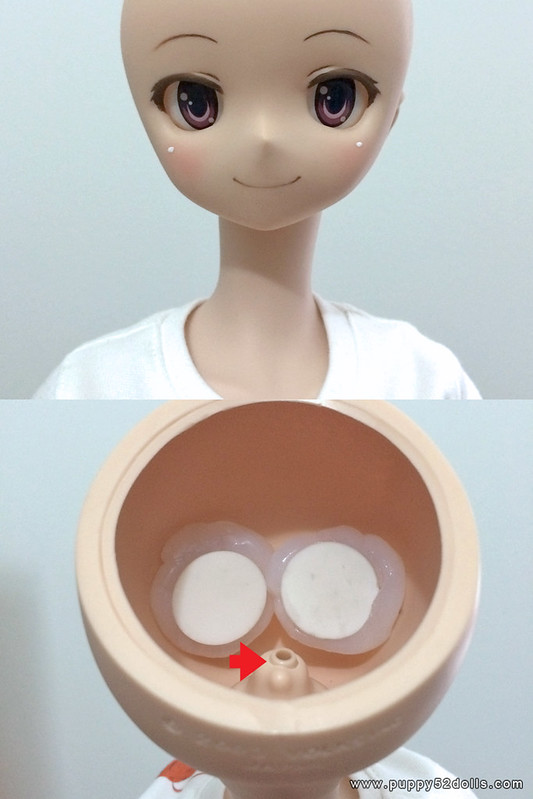 I don’t have the clear tube at the moment, but I do have some masking tape at hand. I also heard that the Tamiya masking tape is a great product which does not leave residue on the vinyl. Below is the temporary masking tape hack, and Dollfie Dream Yuki Morikawa head placed into position. 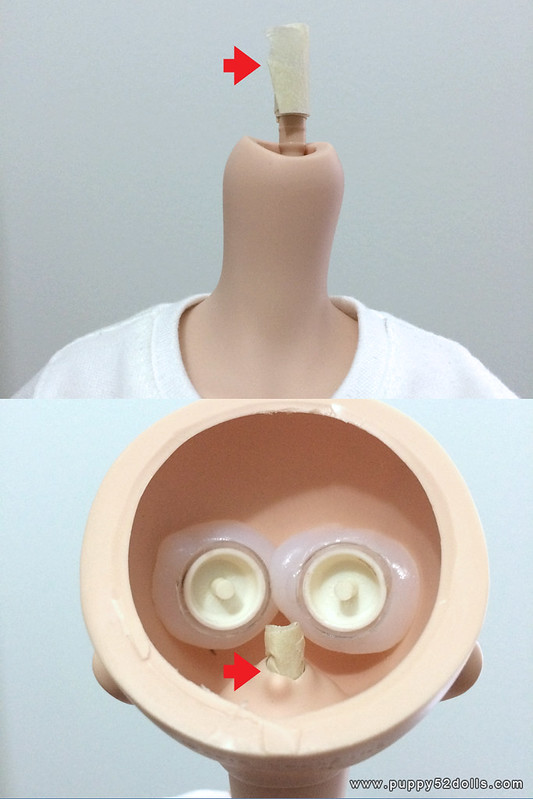 Thanks again for reading my quick first impressions, I hope to show more photos soon ^o^/