Currently Daisy and Clover are visiting for a while, as a wonderful lady collector I know kindly dropped her off where I work at — a wonderful surprise to be reunited with the two, who had travelled around Japan then made their way back after being auctioned off for charity :) 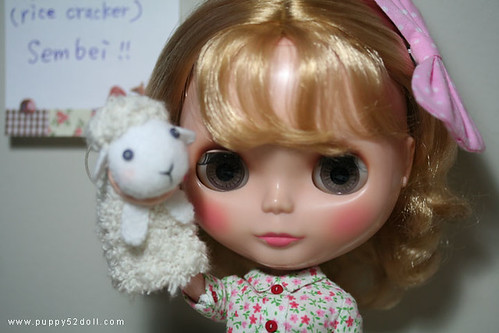 We remained the semi-finalists this time round but we wish to congratulate the wonderful finalist entries! It was an amazing experience and we hope to try again next year!

Why Daisy and Clover?
Daisy is named after one of my favourite flowers, and Clover for a little bit of luck!

Daisy and Clover was mentioned on blythedoll.com :D below is screen capture!

Loosely translated (Thanks Natsuko!):
Based on the song “Mary had a Little Lamb”. The pull ring forms the collar for the puppet lamb and so the two (Daisy and Clover) are always together. Wiggle your finger and you can show off the lamb puppet. How very cute!

Since the inspiration is of American origin, my Blythe custom reincarnates as a young Caucasian lady, who is a child at heart. Her name is Daisy and she is a kindergarten teacher in her twenties. During her leisure hours, Daisy and her puppet lamb, Clover, are an inseparable pair, just like in the nursery rhyme!

Daisy’s outfits are designed to be versatile. They can be mix and matched such that she can be a girly girl indoors and an adventurous tomboy outdoors. A feature of the outfits is a pocket on the pinafore dress, which fits and hides the pull ring when it is not being used as a collar for the lamb

I wanted to give Daisy a child-like quality so I mixed a pastel pink for lips and blush, and picked brown, a rather neutral colour, for her eye shadow to give her eyes some definition. I remembered seeing a superior face mold Blythe (French Trench) with curly hair with bangs, she look extremely child-like, so I decided to select a doll with short curly hair.

I was very close to picking my favorite primmadolly 2, Saffy, but I decided that a Blythe with a center part will be better for the hair style I have in mind. In the end, SBL Pinafore Purple is my choice, since I feel that the slightly dark blond of pinafore purple’s hair makes her appear fair skinned.

Clover can follow Mary everywhere if it is attached to her in some way other than just affection. Therefore, test patterns and proto-types were experimented with to ensure the final puppet fits in securely by slipping the body thru the hole of the pull ring. A bell is sewn as the tail of Clover, so if it drops on the floor by accident when not wearing the pull ring collar, the bell tinkles. Clover can also be a small finger puppet for the Blythe doll owner.

List of customizations made:
Hair: Bangs have been cut and slightly curled to achieve a curled wispy look
Face: Sand matted carefully, lips were hand painted with a custom shape inspired a little by kenner lips, blush and eye shadow airbrushed. Human eyelashes with texture similar to EBL lashes were used to replace her original lashes and the front eye chips had been changed to turquoise green and dark brown.
Body: A gingham ribbon bow has been added to the pull ring, which also acts as a collar for her companion.

2 Responses to Daisy and Clover